Mario Kart Live: Home Circuit, released for Nintendo Switch in 2020, combines the ambiance of old Mario Kart games with the possibilities of new technology. With the game, you can race on tracks built into your own home by means of augmented reality. In this article, we’ll go through what it actually feels like. Is it any good?

No need to race circles around it. Home Circuit is more fun than I initially imagined. The go-karts are fast, augmented reality is a fun addition, and the game itself is entertaining.

Home Circuit is a Mario Kart race on tracks built in your own home. The game on Switch itself is free, but to play you need a remote-controlled Luigi or Mario gokart and gates made of cardboard to build the track. The car with accessories costs about 120 €.

The go-kart has a camera that streams video to the Switch screen. Effects, other competitors, and everything else that Mario Kart tracks usually have are added to the screen. The go-kart reacts to changes in the game by stopping, slowing down or accelerating.

The video below gives you a good idea of ​​what driving is like.

How Fast Are Mario Kart’s Go-Karts?

Before buying, I mainly wondered what driving actually feels like. When I opened the package, I was surprised by the size of the remote-controlled car: it’s 20 cm long and 11 cm wide, which is bigger than I imagined. 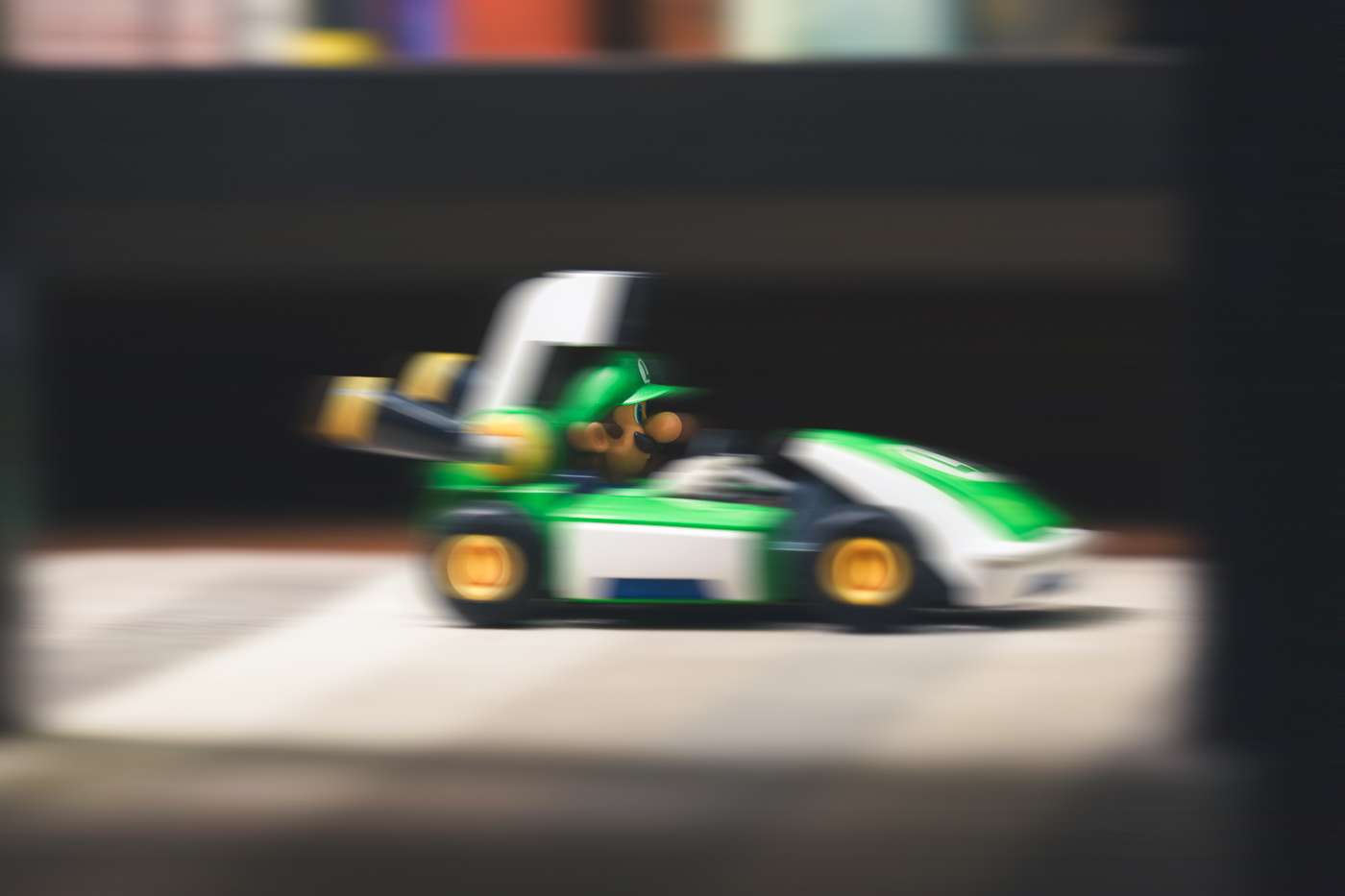 If you follow the cars in real life, they will move quite slowly. However, the pace on the Switch screen is quite different and even at the slowest pace quite challenging. At 150 cc, the car’s battery lasts about 90 minutes, according to Nintendo.

At faster speeds, the car also starts to move faster also in real life. You can feel the speed. Winning enough cups to unlock the faster go-karts is worth it. In this Reddit thread someone calculated the speeds:

Thus, at top speeds, the car goes doubly as faster as at its slowest.

Tips for Building Tracks in the Home Circuit

At first, I made a very simple figure 8 in the kitchen, drove a few laps, and was ready to conclude that the Home Circuit was a reasonably boring game. The car worked just fine, it was nice to see my apartment from a new perspective, but driving was confusing in a small space. 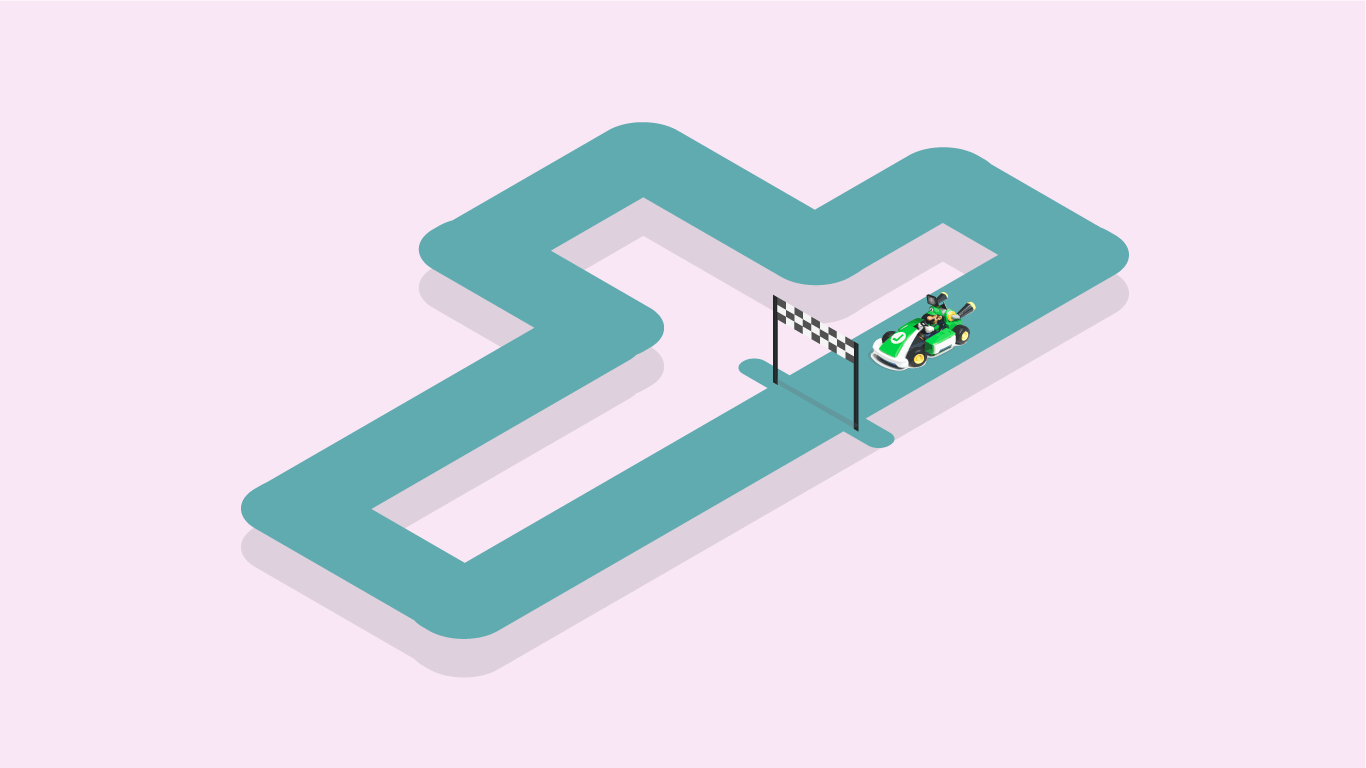 You get the most out of the Home Circuit by accepting the fact that building tracks is as important as racing. The game comes with four gates, which is enough to make all kinds of tracks. The game got exciting as soon as I built a track that went under the kitchen table and under a row of bookshelves – then between the cardboard boxes stacked on the hallway rug and back to the long straight finish line in the kitchen.

Space is Needed to Feel the Speed

I wouldn’t buy this game for a very small apartment. It’s true that the range of the Switch is only about 5 meters according to the box, but the floor plan of the apartment and the available squares are what makes the difference.

The best tracks can be built in an apartment with a hard, flat floor (parquet or laminate) and a spacious floor plan. For example, our kitchen-living room has enough space for a complex and zig-zaggy track, even though the apartment is otherwise just an ordinary 3-bedroom apartment.

Low Carpets Are Not a Problem

The go-kart does surprisingly well on low and tightly-knit carpets. Going over, the car jumps, but it doesn’t slow down the pace that much. Heavier, thicker carpets will be a problem, though. As well as hair and anything extra you’ve got hidden under the bed.

Build Your Own Track from Stuff Around the Home

Beating my own personal bests in the time trial mode proved to be the most exciting game mode. I found myself enjoying the challenge of getting better at one track – especially if I had put effort into making it challenging.

Use anything and everything you have lying around: dog toys, boxes, chairs, books… If you build the track so that it passes underneath the sofa, for example, use colored lights to add extra punch.

Is Mario Kart Live: Home Circuit Worth It?

The go-kart costs about 120 euros, which is fairly expensive. Or cheap. Depending on how far in the future you’re currently living in.

The augmented reality works really well and the game is definitely enjoyable. It’s also a whole new, almost magical way to experience your own home.

If I had had something like this as a kid, I would’ve been building tracks from sun-up to sun-down. Making the tracks adds a nice real-world flavor to the game. Also, from the point of view of anyone not playing, a car speeding around the house is more interesting than a go-kart only moving on the TV.

However, the game requires certain conditions: enough space and a suitable floor. For a studio or a small room, I wouldn’t necessarily buy the game because good tracks require space and the signal deteriorates quickly if there’s even a thin wall in between. That said, with a little ingenuity, you can make small spaces work too.

Home Circuit is fun, challenging and novel. The occasional hiccups don’t interfere with the joy of Mario Kart from the days of yore.